“Laura Taylor touches our hearts with THE CHRISTMAS GIFT. A former senior investigator for the Justice Department moves to Kentucky to take possession of an unexpected inheritance, and he falls in love with a beautiful interior decorator. Together, they attempt to protect an abandoned infant during the Christmas holiday season. Ms. Taylor ALWAYS creates empathetic characters who triumph over adversity with courage and grace.” Romantic Times Book Reviews 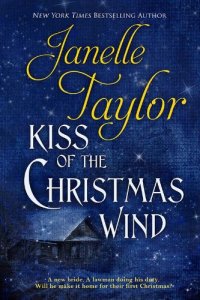 KISS OF THE CHRISTMAS WIND 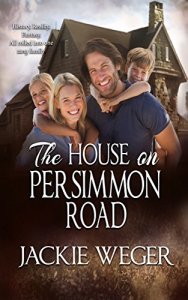 THE HOUSE ON PERSIMMON ROAD

Need Help? Hire a Ghost. She Cooks. Lottie Roberts has been sitting on her bones since the Civil War, waiting for her ticket to heaven until Justine Hale moves into Lottie’s two-hundred-year-old house with three generations of emotional baggage: Her mother, her ex mother-in-law and two pesky children. Lottie senses in Justine a kindred spirit, one filled with heartache and in reduced circumstances, which mirrors Lottie’s situation exactly. Justine needs help. Lottie is of a mind to provide it, but before she can say squat, Tucker Highsmith arrives. His dark eyes, lazy grin, and sexy Alabama drawl coupled with the dern braggart’s Mr. Fix-it talents just might be the answer to all of Justine’s problems. Or maybe not…Because Lottie has her own agenda, one she has been waiting, hoping and praying for since she discovered her bones on a hidden staircase.

KISS OF THE CHRISTMAS WIND

SANTA BABY BY THE SEA ~ BARGAIN

Dillon Bakersfield spots Crysta Jones at an outdoor venue on a sultry spring night and is powerless against her seductive smile. Crysta is equally entranced and the two join together as if drawn by love’s flame.
Career-minded and determinedly single, they indulge their passions and go their separate ways. However, the consequences of their lovemaking force Crysta to rethink her life’s ambition. She doesn’t want to thrust the burden of parenthood on Dillon. He’s a good man, and she knows he will be responsible—but she longs for a man who wants to be a father. Can a birthday wish bring a Christmas miracle?

Book 5 of the Ocean City Boardwalk Series, where life isn’t just fun in the sun—there’s love waiting on those sandy shores!

Dina Griffin flees a dangerous situation and ends up in Ocean City, Maryland where she hopes to spend the holidays in hiding. Trusting no one, she wants only one thing this Christmas—to feel safe. Then Officer Gav Thomas threatens to arrest her for shoplifting. Shoplifting?

Gav is certain there’s something Dina isn’t telling him about her visit to his seaside town, so he devises a means to stick close to the vulnerable beauty. An unexpected attraction sparks, fierce enough to heat up the salt-tinged, wintry nights.

But the trouble Dina had hoped to escape arrives at her doorstep, bringing with it stark-raving fear and the realization that she must place her trust in someone.

Is Gav really just a local cop… or is he Dina’s guardian angel?

The town is preparing to celebrate the holidays when a snowstorm hits and threatens to ruin the festivities. But that’s not the only threat blowing into town…Pop’s son is here from California to enjoy Christmas with his father, but when he leaves, he’s taking Pop with him…or is he? Will the town give up the Godfather of Magdalena, or will they show Pop’s son that when we open our hearts, anything is possible…even second chances?

Half-bloods with Thierry’s skill set are given two options. They can join the conclave’s marshal program, or they can pack their bags. Turn down the job offer, and you’ve just shredded your residency pass for the mortal realm and booked yourself a one-way ticket to Faerie.

Texas is the only home Thierry has ever known, and she’s not going anywhere. Even if it means following in her notorious father’s footsteps as a peacekeeper. But pinning on the badge opens her eyes to the fact sometimes fae need protection too, and that sometimes humans are the real monsters.

If her husband turns up alive—she’ll kill him!

Explaining to the seriously sexy cop why she hasn’t noticed her husband has been missing for three days is both embarrassing and sobering. But the day Fiona Rowland lifts her head above the churning chaos of kids, carpools, and a million things to do, annoyance turns to fury…then to worry. Where is Stanley?

Having one of those wake-up-and-smell-the-coffee moments changes the way a woman looks at things: marriage, money, family, and friends. And when her best pal from high school arrives (packing her own secrets) to lend support, it turns out even the past isn’t quite what it seems. Scrambling to make sense of the drama unfolding, Fiona discovers there’s an upside to having your whole world turned upside down. It’s easier to grab the good stuff.

A delightful mixture of women’s fiction, chick-lit, romantic comedy, and mystery, Finding Fiona has something for every reader. The discussion questions included at the back of the book make this the perfect novel for book clubs and reader groups.

This space cougar is on the prowl, with a handsome virgin in her sights.

A powerful Dragon shifter and a lethal beauty team up to protect the spaceship Orion…but find themselves locked in a battle of the sexes and a fight for their lives!

Sirena Blaze is a seductress renowned across the galaxy for leaving enthralled lovers in her wake. But when the Orion is threatened by evil in the form of deadly serpents, this guard captain is all business. Until she meets her new co-captain of the guard, that is. He’s a fabulous hunk of male, and she sees no reason they can’t enjoy each other. But for the first time, a man turns her down flat.

Slyde Stone has never wanted anyone or anything more than his beautiful, sultry co-captain. But he has a secret—he’s a dragon shifter, one of a legendary race who must mate for life, or not at all. Though he burns to have her, he must keep Sirena at a distance, even if it means watching her with other men and dealing with her fury at his rebuff.

Sirena sets out to get her revenge, in the form of seduction. All the odds are in her favor, until Slyde makes her a wager she can’t refuse—if she finds the deadly serpents first, she wins one night with him. But if he wins, Sirena must agree to be his—forever. Either way, she can’t lose… or can she?

Slip into your heat-proof space suits—it’s snakes on a space ship in this smoking hot sci fi romance!