Educating one’s self in the art of love takes time…

Lady Caroline Arabella Starling has been in love with her older brother’s best friend, Caldwell, since she was thirteen. Unfortunately, too many things keep getting in the way of proving her love. Her four younger sisters, her mother, her brother, all of society and the man she loves himself. But where there is a will, there is a way, and Caroline is about to redefine not only respectability but true love.
​
Ronan Henry Dearborn, the fourth Marquess of Caldwell, lives to see himself through Caroline’s eyes but knows he is leading a life unworthy of her or her dreams. He will do anything to keep her from learning the truth about himself and his past, including keeping her at a distance. But when he and Caroline get tangled in a situation neither of them can get out of, the only way to create a happily-ever-after between them is to take up the advice of a French courtesan who re-educates them both in the art of love.

A Handsome Frontiersman, Mysterious Scots-Irish Woman, Shapeshifting Warrior, Dark Secret, Pulsing Romance…The Bearwalker’s Daughter
Karin McNeal hasn’t grasped who she really is or her fierce birthright. A tragic secret from the past haunts the young Scots-Irish woman who longs to learn more of her mother’s death and the mysterious father no one will name. The elusive voices she hears in the wind hint at the dramatic changes soon to unfold in the mist-shrouded Alleghenies in Autumn, 1784.
Jack McCray, the wounded stranger who staggers through the door on the eve of her twentieth birthday and anniversary of her mother’s death, holds the key to unlock the past. Will Karin let this handsome frontiersman lead her to the truth and into his arms, or seek the shelter of her fiercely possessive kinsmen? Is it only her imagination or does someone, or something, wait beyond the brooding ridges–for her?
(The Bearwalker’s Daughter is a revised version of romance novel Daughter of the Wind)
Publisher’s Weekly BHB Reader’s Choice Best Books of 2009

In the tradition of Regency Romance, a sweet story set in the country house 18th century world of upstairs downstairs.

Lucy’s world turns upside down when she learns she is the love child of the Earl of Pennington, and not the late vicar’s daughter.

On discovering she is the illegitimate daughter of a peer of the realm, Lucy Graydene, bereft and grieving, sets out to confront Lord Pennington with the result of his misdeeds. She finds instead his autocratic heir, Stefan Ankerville, and is dragged willy-nilly into the new earl’s unconventional family. Lucy is driven to battle for her independence while she struggles against the venom of the half-sister she never knew she had.

When the secrets of Lucy’s past begin to unravel, she is reluctantly obliged to rely on Stefan’s help. Can Lucy overcome a dangerous attraction to the earl, with whom an alliance is impossible? Or is there a faint hope of happiness in the hidden truth of her origins?

In the year 1066, England struggles against Norman invaders, and two strangers cross paths on a pilgrimage fraught with peril–only to discover a love worth any danger…Battle-weary knight Marc de Sens has never encountered a woman like Sunniva of Wereford: beautiful, brilliant, and miles above the curs who call themselves her kin. Alas, she is promised to another and Marc’s obligation is to his three orphaned nieces. But when Sunniva’s circumstances suddenly change, Marc learns the truth about her “betrothal”…

A rough-hewn knight so gentle with children intrigues Sunniva, who never knew a kind word or caring touch from any man until Marc rescued her from the grimmest of fates. When her loutish father and brothers are killed, Sunniva is finally free, but her troubles are far from over. Although Marc has appointed himself her protector, he has a dark secret–as well as an uncanny ability to disarm her completely… 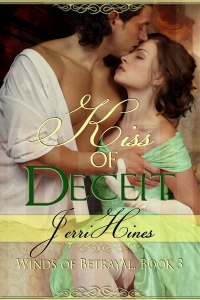 All sale proceeds from the Winds of Betrayal Series from April 16, 2013- April 21, 2013 will be donated to the American Red Cross to benefit the victims of the Boston Marathon bombing. This will include The Cry For Freedom, Embrace of the Enemy, and Kiss of Deceit.

The tides of war have shifted. When all eyes turn south, Doctor Jonathan Corbett finds himself once more thrust into the war’s turmoil. On assignment from General Washington, the dashing doctor discovers his mission has taken him straight into a conflict where the British are not the only ones to be feared.

Rebekah Morse has no time to contemplate the exploding war around her. Caught up as a pawn in a deadly conspiracy, she finds her only hope lies with her old friend, but things have changed since they last saw each other.

Yet destiny has not intervened in their lives without cause. Rebekah’s strength, courage, and breathtaking sensuality set within Jonathan a desire he swore never to feel again. When Rebekah’s life is threatened, Jonathan is determined to save the stubborn woman whether she wants to be saved or not. Now Jonathan and Rebekah must face the perilous threat together—only to discover a passion they never imagined…