When a new attorney accepts a pro-bono case of an abused woman suspected of attempted murder, he ends up with more than he bargained for. She’s the ex-wife of one of the oldest and wealthiest families in Ashville, and her in-laws will stop at nothing to conceal family secrets.

Unable to ignore his attraction, he gets closer than he should. But when all evidence points to the woman he’s falling in love with, he will risk everything — his reputation, disbarment, maybe even his life to uncover the truth.

In the first installment of USA Today bestselling author Christi Caldwell’s Sinful Brides series, a bookkeeper-turned-lady takes a gamble on a man she never meant to fall for.

Lord Robert Dennington, the Marquess of Westfield, has long reveled in the freedom afforded him as the ducal heir. He knows he must someday do right by the Somerset line, but he’s in no hurry to give up his carefree existence.

Helena Banbury is a bookkeeper in a gentleman’s gambling club, adept at analyzing numbers and accounts but helpless for lack of influence. She’s never belonged among the nobility on the gaming hell floors, but neither does she feel completely herself among the men who run the Hell and Sin Club, despite the fact that they are family. The once-illiterate girl from the streets wants more than the gilded walls her protective cage can offer.

When Robert mistakenly enters her chambers one night, Helena is forced out of her predictable life and thrust into the glittering world of Society. Will the charms of the marquess prove more perilous than any danger she ever knew on the streets? 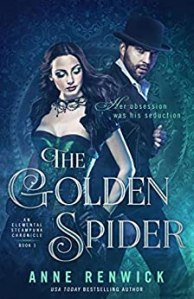 A stolen clockwork spider. A forbidden romance. A murderous spy on the streets of London who must be stopped before it’s too late.

Lady Amanda is tired of having both her intelligence and her work dismissed. After blackmailing her way into medical school, she catches the eye of her anatomy professor from the moment she walks into his lecture hall. Is he interested in her? Or only her invention–a clockwork spider that can spin artificial nerves?

Lord Thornton, a prominent neurobiologist, has been betrayed. Secret government technology has been stolen from his laboratory, and a foreign spy is attempting to perfect it via a grisly procedure… using gypsies as test subjects. The last thing he needs is the distraction of a beautiful–and brilliant–new student, even if her spider could heal a deteriorating personal injury.

Until her device is stolen and used in the latest murder. Lord Thornton has no option but to bring her into his laboratory as well as the investigation where they must fight their growing, yet forbidden, attraction. Bodies accumulate and fragile bonds are tested as they race across London, trying to catch the spy before it’s too late.

CLOUDS IN MY COFFEE ~ FREE

When Ellison Russell is nearly killed at a benefactors’ party, she brushes the incident aside as an unhappy accident. But when her house is fire-bombed, she’s shot at, and the person sitting next to her at a gala is poisoned, she must face facts.

Someone wants her dead. But why? And can Ellison find the killer before he strikes again?

Add in an estranged sister, a visiting aunt with a shocking secret, and a handsome detective staying in her guesthouse, and Ellison might need more than cream in her coffee.