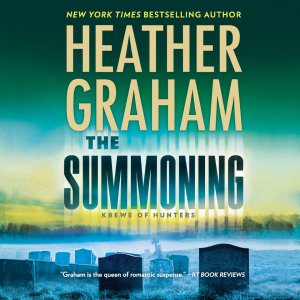 Written by: Heather Graham | Narrated by: Luke Daniels
A riveting, heart-pounding listen from an author that “wields a deftly sexy and convincing pen” (Publishers Weekly): After a ghostly encounter at the bed-and-breakfast she recently inherited, Kristi seeks the help of handsome medium Dallas. As the two investigate the strange happenings, they uncover a mystery that could put the whole town — and their newfound love — at risk…

Jana Embers isn’t one to sit back, though. The first thing Jana realizes she needs to do is empty the joint bank account, then she’s thinking she might take a tire iron to her soon-to-be-ex-husband’s truck. After that, she’s not sure what she’ll do … Maybe she’ll adopt a cat.

Very quickly, Jana decides she doesn’t need a man. A perfectly sized and shaped device and writing about the perfect hero will more than suffice. Determined to share her philosophy, she pens You Don’t Need a Man, encouraging women everywhere to go out and experience life instead of waiting for a man to complete them.

Three years later, Jana has a New York Times bestseller and a contract for a movie adaptation, but she also has a shoulder injury, which has put a crimp in her new carefree lifestyle. Worse yet, she can’t write. Her only hope is Dr. Adrian Kijek, a renowned physical therapist who hates her simply because she wrote a book about not needing a man, or so she thinks …

Twenty-four-year old Phoebe Hawley is on a quest to find her family a home. On the road with two siblings, twelve-year-old Maydean and five-year-old Willie-Boy, Phoebe is out of money, out of gas, and out of patience. The only things she owns in abundance are backbone and pride–neither of which she can trade for food or gas.

A collision with Gage Morgan puts Phoebe’s mission in even worse jeopardy–until Phoebe discovers Gage owns the perfect place for her clan. However, she soon discovers that Gage is the unlikeliest man in the universe to offer a helping hand.

Phoebe wields all the country smarts she owns to worm her way into Gage’s heart, but nothing works. With time running against her family, she plies one last inducement–her scarce feminine wiles.

SECOND CHANCE VALENTINE ~ BARGAIN $0.99
As teens, Josie and Alex met under golden sunshine, frolicked in the surf and sand, and fell head over toes in love. But circumstances arose that ruined their one glorious summer, and Josie fled Ocean City with a broken heart.

Now Josie’s grandmother is ill and needs help with the family business, a thriving harbor-side diner called Joe’s Place. So after more than a dozen years, Josie returns to her hometown only to discover she has a 180 pound problem—Alex is the Kitchen Commander at Joe’s Place. Surely, Josie can work with Alex to keep the diner going and retain her dignity until her grandmother is back on her feet. However, when Alex’s little girl starts scheming, not a single heart will be safe against the twelve-year-old matchmaker.