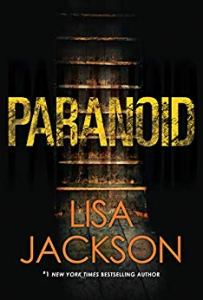 From #1 New York Times bestselling author Lisa Jackson comes a new novel of nerve-jangling suspense as a woman haunted by guilt realizes that nothing can be trusted—not even her own memory . . .

There are people in Edgewater, Oregon, who think that twenty years ago, Rachel Gaston got away with murder.

Rachel still has no idea how a foolish teenaged game turned deadly—or who replaced her soft pellet air gun with a real weapon. When a figure leapt out at her from the darkness, she fired without thinking. Too late, she recognized her half-brother, Luke, and saw blood blooming around his chest.

Grace Ashby wakes to the sound of a horrifying scream.

She races down the hallway, finding her mother’s lifeless body on the floor in a pool of blood. Her mother’s boyfriend Hugh is hunched over her. At first glance it seems Hugh is to blame, but is Hugh really her mother’s killer?

As revelations about Caroline Ashby’s secret life unfold, private detective Sloane Monroe takes the case, but it won’t take long to find the killer. He’s been watching, carefully tracking her every move. And now Sloane’s own life is in grave danger.

Dylan, once the Army’s battalion leader of Mortuary Affairs, now works as a physician at the local Veterans Hospital, while leading her late-father’s Seventh Amendment Militia.

When Tobias Burke shows up to enlist, with his ladies-man humor and lovable Labrador retriever, Dylan knows his killer charm hides an ulterior motive.

As evidence against Dylan mounts, Tobias’s instincts—and then his heart—betray him into wondering if Dylan is being framed.

Now, with Dylan’s militia locked in a stand-off with the FBI and the nation watching the drama unfold on television, Tobias stares down the barrel of the most difficult choice in his life: expose the real killer and clear Dylan’s name, or follow orders.

When a new attorney accepts a pro-bono case of an abused woman suspected of attempted murder, he ends up with more than he bargained for. She’s the ex-wife of one of the oldest and wealthiest families in Ashville, and her in-laws will stop at nothing to conceal family secrets–even murder.

Unable to ignore his attraction, he gets closer than he should. But when all evidence points to the woman he’s falling in love with, he will risk everything–his reputation, disbarment, maybe even his life to uncover the truth.