As a rescue swimmer for the Coast Guard, Wade Faulkner was used to unpredictable situations. But an emergency call late one night turns his life upside down. After finding a boat on fire, he discovers a dead body and a visibly shaken woman in need of rescue. Now he finds himself entangled in a murder mystery between two teams of treasure hunters out for the discovery of a lifetime . . . and he’s falling for the main suspect.

Darcy Delmar survived an explosion on her boat while racing to be the first to find a sunken treasure she believes to be worth more than most people can possibly imagine. Now she is the lead suspect in the murder of a fellow treasure hunter. Or is she simply the next victim?

As Wade and Darcy lose themselves to the passion of the hunt and a new love, one thing becomes clear: this is a treasure worth killing for. 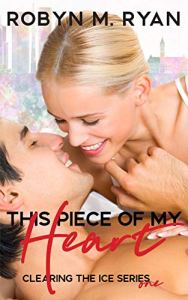 THIS PIECE OF MY HEART

She had her future all planned…until she met him.

Struggling to live up to the high expectations of overprotective parents and a hefty family name, Caryn Stevens only wants one summer of fun before she focuses on finishing her college degree. She knows her destiny—to lead her dad’s multi-million dollar business. But that plan changes forever the day she runs into—literally—sexy and single professional hockey player, Andrew Chadwick.

Sparks instantly fly between the two, and Caryn can’t resist his charms as she discovers that Andrew has a reputation of winning – both on and off the ice. One of the most eligible singles in Toronto, Andrew could have any woman he wants, and he’s got Caryn in sights. But, when Caryn’s parents disapprove of the match and threaten to disinherit her and his hockey team trades him to a new city, it may take more than love for the couple to survive this penalty play.

College and career are hard enough without bringing love into the mix, so the last thing Jesse is looking for is a spring break fling. His future entails getting an MBA and taking over the reins of his father’s small-time plumbing company and making it successful. He doesn’t have time for a girl, especially not one who’s related to the spoiled rich girl who broke up his last relationship. One week with Kayla, though, changes everything.

Eighteen and in love, Jesse and Kayla now have everything they’ve ever wanted–until tragedy strikes. Now, thrust into a world of heartbreak and grief, others insist they are too young. But when you find the love of your life, no matter what happens, the only thing you can do is hold on and LOVE LIKE CRAZY.

Gifted with an uncanny ability for evaluating football talent and a dogged determination to succeed in a man’s world, Rachel finally gets her chance in the pros as a staff member of the Seattle Steelheads. Her first assignment is to help Derek get his game back. While working with him on the field, she succumbs to the chemistry between them and spends a forbidden night in his arms.

The next day Derek has the best performance of his not-so illustrious career. Soon Derek and Rachel are racking up nights in bed, and the team is racking up wins. They’re risking it all, but they can’t resist each other. Not only is Rachel his coach, but Derek knows the truth behind a secret that destroyed her father years before.

Rachel and Derek are torn between love and duty, and the clock is winding down. It’s fourth and goal, one second left in the game. The next play Derek makes must be for Rachel’s heart.