A HEAVEN FOR TOASTERS ~ FREE

Set in the near future, A Heaven for Toasters is more than a sci-fi crime adventure with plenty of romance and wit. It’s the book that will make you look at your toaster in a whole new way.

Ella never leaves work early. She loves her copy of Strunk & White. She buttons her shirt up to the top. She buys beige furniture. She pays her bills on time and always says hello to her neighbors. If she were a superhero, her alter-ego would be SuperPoliteGirl. She doesn’t have any vices—as long as swearing in Italian doesn’t count.

If she were in a romance novel, her fiancé wouldn’t fit the mold of the love interest—not by any stretch of the imagination. His shoulders aren’t particularly broad, his five o’clock shadow comes in patchy during the night, and his voice is a moderate tenor, not a shiver-inducing baritone. But those minor issues are the elements of fiction. No one needs that in day-to-day life.

In the final stages of WWII, archaeologist Andreas Stais follows the signs that could lead him to unearth the face of the goddess who has been haunting his dreams for years, all the while searching for the woman who, over a brief encounter, has come to dominate his waking hours. In present day Greece, another Andreas, an Interpol officer, leaves New York and returns to his grandparents’ island to bid farewell to his beloved grandmother. Once there, he will come face to face with long-buried family secrets and the enigmatic Iro. When gods and demons pull the threads, no one can escape their fate. Pagan rituals under the glare of the full moon and vows of silence tied to a sacred ring, join men and gods in a common path. 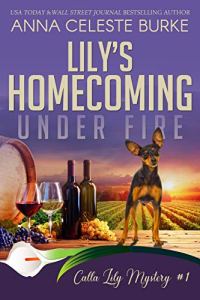 In California’s Wine Country, Someone Wants Lily Dead
When Lily Callahan returns home to California’s wine country, sparks fly amid a hail of bullets as she and U.S. Marshall Austin Jennings take cover.

Money, fame, and love all come into play as motives when Lily and Austin try to find out who sent hired guns to kill Lily. The trouble begins soon after her beloved Aunt Lettie dies and leaves her estate to Lily—is it about the money?

>>>Is Someone Trying To Replicate Lily’s Soap Opera Murder?
Is life imitating art? Lily’s trouble-making character in a long-running TV soap was recently killed by a paid hitman. Is a crazed fan trying to end Lily’s life as well as her acting career? Did her agent borrow a page from the script after Lily dismissed him?

>>>An Old Flame Who Will Kill To Get What He Wants
Lily’s surprised to find an old flame waiting for her when she returns home. Has he reached the point that if he can’t have her, nobody can? If it’s about an old love that’s become dangerous, the new one that propels Lily and Austin into each other’s arms won’t help.

Life in small-town California wine country is a tangled vine of mystery, suspense, and intrigue.