Zoey Mathers had everything going for her until one night she lost her biggest client, her job, and her reputation. Leaving her life up to fate, Zoey closed her eyes and pointed. She would serve out her career exile in the small mountain town of Moonshine Hollow where moonshine flowed as freely as a mountain stream.

Giving up the law to become a baker in Moonshine Hollow turned out to be the best thing Zoey had ever done. She was happy and enjoying life in her new small town. But Zoey should have learned the first time . . . one night can change your whole life.

After unknowingly crashing a battle between witches, Zoey accidentally becomes a witch herself. That’s all before Zoey stumbles over a murder victim and the town’s sheriff becomes involved. Now she’s trying to find a murderer, stop two old witches from playing matchmaker, and learning she’s way more than a mere accidental witch.

And that’s all before fate turns up one more sexy hunk of a twist . . . 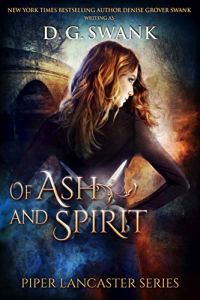 OF ASH AND SPIRIT

She’s soon confronted with evidence she can’t deny. Ghosts exist, and worse, so do demons. As if that weren’t enough, Asheville has a new resident demon that’s intent on killing her, and a sinfully handsome stranger who says she’s the only one who can destroy it.

Barely able to accept the complete reversal in her convictions, Piper must discover-and embrace—her true identity before it’s too late.

Beautiful Yolande comes from an exotic line of exorcists—a talent she considers a gift—and a curse. In fourteenth century England, a female exorcist who is also black is an oddity. She is sought after and trusted to quiet the restless dead and to send revenants to their final rest.

Geraint the Welshman captures Yolande’s heart with his ready smile and easy ways, and the passionate fire of his spirit. An entertainer, he juggles and tumbles his way through life—but there is a serious side to him that runs deep. He offers Yolande an added strength in her work and opens his heart to her with a love such as she’s never known.

But Yolande is not free to offer Geraint her love completely—not until her “time of seven” has passed.

Can the powerful attraction between them withstand the powers of evil who mean to separate them forever? Yolande’s conscience and conviction force her to face this evil head-on—but can Geraint save his Dark Maiden…

Newly minted P.I. duo Lalla and Pearlie Bains, are thrilled at the prospect of signing a well-connected judge as a client.
But then a stranger persuades Lalla’s dad’s two foster boys to release a cage of chickens in the county courthouse and the distraction is used to cover the judge’s murder.
Now Lalla and Pearlie are in a race to catch a killer before the killer decides two boys will have to be silenced…permanently.