Keep Your Green Madness Giveaway!
==========
Enter for your chance to win some great prizes!

This month I have joined together with other bestselling authors for a phenomenal giveaway! Enter the giveaway then grab these great Romances below!!!

Bonus Material! This set includes the prequel, Creatus (They Exist), and a sneak peek at Creatus Rogue.

Sam Walters has made a deal with the devil.

In order to win a much-needed contract as physical therapist to one of the NHL’s leading hockey teams, Sam must delay the recovery of their sniper, Mac Wanowski. The trouble is, the more she gets to know the taciturn hockey player, the more she aches to help him.

Mac ‘The Hammer’ Wanowski chased the Stanley Cup dream for too many years. Last time he was close it had cost him his wife. As injuries continue to plague the team, Mac works to catch a killer and keep the woman he’s come to love from the hands of a madman.

Hockey can be a dangerous sport, especially when millions of dollars are at stake. 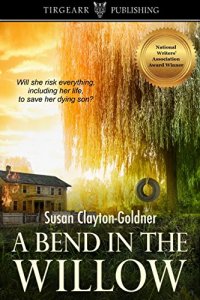 A BEND IN THE WILLOW

Willowood, Kentucky 1965 – Robin Lee Carter sets a fire that kills her rapist, then disappears. She reinvents herself and is living a respectable life as Catherine Henry, married to a medical school dean in Tucson, Arizona. In 1985, when their 5-year-old son, Michael, is diagnosed with a chemotherapy-resistant leukemia, Catherine must return to Willowood, face her family and the 19-year-old son, a product of her rape, she gave up for adoption. She knows her return will lead to a murder charge, but Michael needs a bone marrow transplant. Will she find forgiveness, and is she willing to lose everything, including her life, to save her dying son?