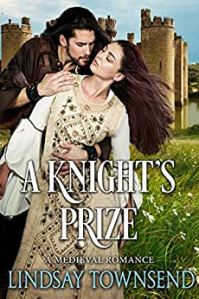 Sir Ranulf is a bold, strong knight, ruthless in combat, but stricken by the loss of his lady. He feels dead inside and sees the glittering world of the tourney as so much frippery. In a time of great pestilence and suffering, he has become disillusioned with the petty, artificial world of lords and ladies, until he comes upon a new face at a joust, the mysterious, exotic Princess of Cathay. Soon, he swears, she will be his, his woman, his prize.

Edith had been a smith’s widow, struggling to survive with her villagers against a heartless lord. Seizing a chance, she has transformed herself and her fellows into a new creation, an eastern princess and her luxurious court. With their silks and spices, veils and tents, perfumes and flowers, they now look the part of royalty and eat well, but if she is unmasked, the nobles will kill them.

So far, Edith has been able to play the courtly game of favours, gallants and damsels with the best, but this Sir Ranulf reminds her too greatly of her hidden, secret past, and more besides. Even as she struggles to captivate him, she finds herself naturally drawn to Ranulf. Amongst all the deceptions, could this be real?

(First published as ‘To Touch the Knight’ by Kensington Publishing, New York, in 2011.)