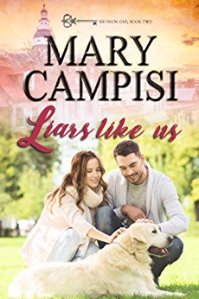 One of these days, you’re going to have to admit there’s something between us, no matter how much you want to deny it.” Tate Alexander, Liars Like Us

What happens when destiny ignores the rules?

Tate Alexander has the good luck to be born with looks and charm, and the bad luck to belong to a family where money and power mean more than honor and integrity. When he returns to Reunion Gap to take over his father’s company, he’s determined to uncover and right the wrongs his father committed. He’s also determined to win over Charlotte Donovan, the woman who’s stolen his heart. But she’s not impressed with his looks or charm, a small detail he doesn’t intend to let stop him. And while the rest of the town acknowledges and respects the longstanding Alexander-Donovan feud that has pitted the families against one another for generations, Tate ignores it in his quest to convince Charlotte they belong together.

Charlotte Donovan is big on causes and vows no man will ever “own” her, especially a playboy who can’t commit to a vehicle, let alone a woman. There’s only one problem: her heart isn’t listening to her brain. In fact, her heart is doing its darnedest to overpower her brain, as in snuffing out logic and common sense. The only way to battle it is to create a web of lies that begin and end with one goal–keep Tate Alexander believing she doesn’t care about him.

When the lies catch up with her, it’s not going to be easy for a man like Tate to forgive the woman who betrayed his trust. Will it be too late for them or can destiny step in once again and give them a chance at happiness?

Bonus: Also included in this e-book is an excerpt from Lovers Like Us, Reunion Gap series Book 3.