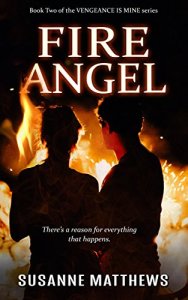 Everything happens for a reason.
Criminal profiler Jake McKenzie returned from Afghanistan minus a leg, determined never to let anyone get close enough to hurt him again. When his old friend asks him to help with a serial arsonist case, he jumps at the chance to prove his worth, but as the bodies pile up, he realizes he needs help. He convinces the chief to bring in a fire investigator, stunned to discover that the woman is none other than the girl who vanished from his life twenty years ago.
Alexis Michaels fled Paradise and an abusive uncle only to almost die in a fire that left her scarred not only on the outside, but on the inside, leaving her with psychic abilities. With that gift, she’s climbed to the top of her profession. Her abilities may be the only thing that can find and stop the Fire Angel, a pyromaniac turned revenge arsonist serial killer who’s slowly turning a peaceful town into Hell on Earth. The problem is, to do the job, she has to return to the one place where she swore she would never set foot again.
Faced with confusing emotions and a killer who’s made it clear he wants her to stay out of his business, Alexis must deal with the past before she can move on. But things may get too hot even for her as the Fire Angel moves toward the final act in his revenge drama.