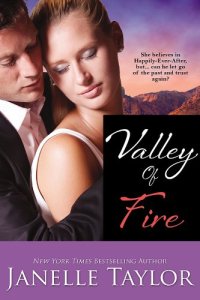 Her world is built on Happily Ever Afters. His world is built on a cynical distrust of fairytale romance. Will he prove that she’s just another huckster selling fake dreams? Wealthy businessman Steven Winngate thinks bestselling novelist Kathleen “Brandy” Alexander is researching him for a book. When he finds her in the desert outside Las Vegas, lost and sick from the heat, he wonders if she’s pretending to be a stranded hiker—conning him just to score an introduction. But Brandy is the real deal—honest, innocent and very distraught by her sudden dependence on the handsome blue-eyed stranger who rescued her. He says his name is Lance Reynolds, but that rings false. Soon she and “Lance” are circling each other amidst the glitter of Vegas, trying to break down the wall of mystery between them. Passionate, intense, romantic and intriguing—this hot battle of the sexes will burn both sides.Janelle Taylor has written more than fifty novels, with nine New York Times bestsellers and sales in the millions. Bell Bridge Books is proud to publish her novel, VALLEY OF FIRE, for the first time in ebook.