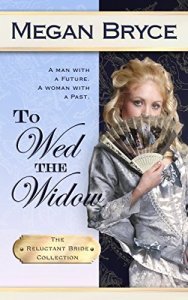 TO WED THE WIDOW

Come back to a time when manners are everything and rules are made to never be broken. Come back to a time when men are in charge and women do what they are told…
Yeah, that never happened.
Welcome to Megan Bryce’s Regencyland, where ladies with backbone get what they want. Where a woman can thumb her nose at rules and care little for convention, and yet somehow, unexpectedly and most reluctantly, find love.

To Wed The Widow

A man with a Future, the Honorable George Sinclair would rather poke his eye out than take his place beside his brother and learn How To Be An Earl. But when an earl orders, a brother obeys. And when an earl tries to make his brother steady and responsible and old and gray, well… it just might kill them both.

The earl would be the first to say that his brother has always had a problem choosing what he needs over what he wants. Lady Haywood would say that very few women who have buried five husbands would bother with a sixth. And George would say… why, this sounds like fine fun.