Magic is found in the heart…

For Olivia Dawson, there’s nothing magic about the holidays. They’re only a convenient excuse to return home to her wolver pack where she can lick her wounds before she moves on. She won’t have to admit the truth. She won’t have to ask for the forgiveness she doesn’t deserve. She’s made so many mistakes, but the worst was leaving the wolver who shared her heart. That’s a mistake that can’t be fixed. Love lost can never be reclaimed.
As far as Brad Seaward is concerned, Livvy Dawson can’t move on soon enough. It doesn’t matter if his wolf comes alive at the sight of her. Once burned, twice shy is Brad’s motto and that hot little wolver burned his dreams to ash. Sure, he always knew it would end that way, but knowing didn’t take away the pain. So why take a second chance when the outcome will be the same?
But this is Gilead, a place with a magic all its own, where hearts are warm, secrets are hard to keep, and pack comes first. There’s shifter magic in the air as the Alpha’s Mate enlists the help of those around her to bring these two lovers back together – with a bonus for the pack. 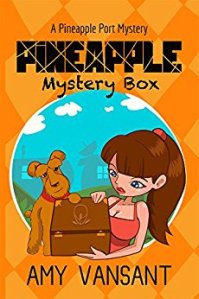 When a giant inflatable Halloween witch goes missing in the Pineapple Port retirement community, Charlotte’s eager to nab the culprit. Before she can lift a fingerprint, someone threatens to kill a new neighbor who looks like an adorable Pomeranian but possesses a disturbing talent for revenge. Moments later, a stranger demands the return of a mysterious wooden box… or else.
Charlotte’s boyfriend, Declan, isn’t having a great morning either. His calculating ex-girlfriend has returned to claim she’s the rightful owner of his pawn shop. She’s livid he’s found a new lady, too.
Eh. Things could be worse. At least Charlotte doesn’t know that a mojito-swilling killer who fed his grandmother to a cat is on his way to Pineapple Port…

A new body, a new life…
Because of a facial disfigurement, Nurse Grace Joye has never felt beautiful, and when she’s told a brain tumor will end her life within a matter of weeks, she’s devastated. Grace’s friend, psychiatrist Dr. Robert Andrews has been experimenting with spirit travel. He suggests that Grace transfers her spirit to the body of his newest patient—Mrs. Vanessa Knight, a gorgeous-looking woman who is soon to be released from life-support. Grace doesn’t need much convincing to take this drastic step. She will live on and realize her two dreams: to be a mother, and be loved by a man. Only to hear her soon-to-be husband’s whispered words just before the life-support is switched off: “Good-bye, darling. I’m glad I’ll never have to see you again.”

Lucas Knight has been contentedly preparing for Vanessa’s death. Throughout their marriage, this volatile woman had become increasingly vicious towards him and their young son. Therefore, he’s appalled and traumatized when, miraculously, she comes out of her coma. Strangely, this girl isn’t anything like the witch he’d said goodbye to. He could love this gentle angel. But, can he trust her to stay this way?

Finnegan MacGillivray, red-haired, freckle-faced social pariah, finds solace in his mother’s garden, while she entertains “dates” in his home. When an accident takes the life of a friend, Finnegan buries the evidence amid the purple dead nettle and bougainvillea, and unearths a treasure trove of human remains. Did his house rest atop an ancient burial ground? Or was there a killer tucking him into bed at night?

His fascination with bones grows as fast as his obsession with his mother. She rejects his advances, and he escapes to the other side of the country. Years later, he returns to his childhood home, to the secrets and the guilt and the bones — and to fulfil his destiny.