HEAT ~ A HOTTER THAN HELL NOVEL

What if the line between good and evil is blurred and the life you live is a lie?

Catch Xavier Moon controls the criminal underworld of Arizona. Safety has a price and when it comes to Madison, he has no interest in money.

This book is intended for mature readers. Contains adult situations and violence.

Each Hotter Than Hell novel is a standalone but so much hotter when read in order. 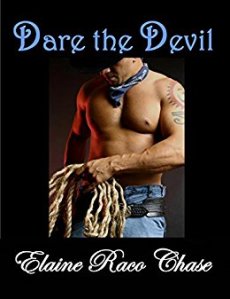 SAVE A HORSE – RIDE THIS DEVIL OF A COWBOY!

Welcome to Glacier Country! Luthor Devlin and his ranch hands were out tracking 20th century rustlers when they stepped into a time warp!

There on the jagged cliffs was a woolly mammoth, a sabre-toothed tiger and her – a tawny, near-naked savage. She was a primal fantasy come true – that left him stunned!

His gaze was locked onto hers. “I’d really appreciate an explanation of all this. You, the hairy elephant, and the cat with the overbite are not the norm in Montana. And I know you can understand my every word. So anytime you’d like to begin.”

Her relaxed appraisal hadn’t gone unnoticed by either the man or the large tiger. The latter proved her undoing. His mouth opened not to snarl again but to emit a long, loud, kittenish yawn. The tiger rolled over, rubbed his back and shoulders into the ground, his hind legs spread-eagle, yawned again, and pawed sleepily at his face. To the amazement of everyone, his sword-like teeth fell out.

“Damn it, Pumpkin, why couldn’t you have just growled!” She extended her hand. “Cam Stirling, action technician.” At his confused expression, she sighed. “Stunt woman.”

She was wild, irresistible – and he was the man to tame her. She dared the devil every day – why not Luthor Devlin!

Stas isn’t your average human. She can bend others to her will, a psychic talent she’s kept hidden since the brutal murder of her parents.

Issac isn’t human at all. He’s an immortal masquerading as one of New York City’s most eligible bachelors while secretly seeking revenge against a former ally.

A fateful meeting ends in a seductive proposition. As their lives intertwine, secrets are exposed and passion ignites. It’s a bond built to last a lifetime, if they’re willing to risk everything to protect it.

Author Note: This is a series, which means there will be overarching themes/questions left unanswered that set up the next book. Each hero/heroine couple, however, will always have a Happy For Now (HFN) or a Happily Ever After (HEA) ending.