Anna Nesmith believes she has it all–a great marriage, a dream job and a home of her own. When an investigator begins asking questions, Anna’s ordered world crashes like Jenga blocks. Frank Caburn is man to the bone and manufactures testosterone like Frito Lay does chips, which seems not to impress Anna one whit as she picks through the rubble of her shattered life. Attracted to Anna, Caburn determines to make her his own–But how to tell her without tripping over a layer of secrets is beyond him. Falling in love has never been more difficult. 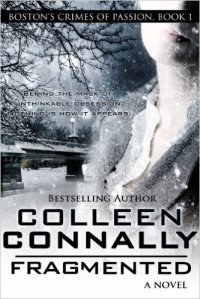 From the author of a #1 Amazon Historical Romance Kindle Bestseller, BROKEN LEGACY, comes FRAGMENTED, a suspense thriller that you won’t be able to put down!

The first in the Boston’s Crimes of Passion Series! A pulse-pounding thriller!Ms Connally’s first murder mystery delivers! Suspenseful…shocking…a psychological thriller– leaving readers on the edge of their seat. Cameron Quinn is caught in a web of deceit. Protecting her brother from being framed for a murder places Cameron in untold danger. When the real killer diverts his attention to her, she has nowhere to turn, especially not to the man she share done unforgettable night… who now is trying to put her brother in prison. A”must read” for any suspense lover!

She would do anything to protect her family…
Cameron Quinn watched her father fall into a world of despair after being falsely accused of causing her mother’s death.Now, her brother is a suspect in a crime she knows he’s not capable of committing. She’ll risk everything to save her brother from the same fate as her father, even destroying evidence that implicates him in a series of murders.

A killer would do anything to get his heart’s desire…
Cameron soon discovers that the police aren’t the only ones who suspect her of covering for er brother. The murderer is still out there and he isn’t happy his plans have been disrupted. Now, the twisted psychopath has turned his attention towards Cameron and will stop at nothing until he has her in his control.

Hetta Coffey is a sassy Texan with a snazzy yacht, and she’s not afraid to use it—most of the time.
She’s an intrepid cruiser, but wild rumors of marauding gangs of flesh-shredding giant Humboldt squid on a rampage in the Sea of Cortez could keep even Hetta tied to an expensive dock. However, when the opportunity for an intriguing and highly lucrative charter arises she talks her best friend, Jan, into signing on for a mysterious cruise.
Damn the calamari! Full bank account ahead! 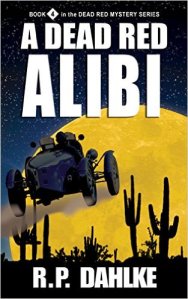 A lonely young artist with a dangerous sideline
A wanna be lawman and his shotgun toting grampa
A priceless antique race car and an unfortunate Emu
~~~
“Stephanie Plum step aside,” by Alana Woods blogger
~~~
“When I see a book come up on my reading lists by RP Dahlke, I dive for them. I love her wit in her story telling. She develops great, believable characters that are easy to get to know …” Pamela S, Amazon
~~~
“This was a WONDERFUL READ from start to finish! I started it at bedtime and figured it would help me fall asleep, but instead I stayed up all night finishing the book & didn’t get any sleep at all. The characters descriptions & aspects of their personalities are sprinkled throughout the book, yet I have a perfect full picture of each one in my mind (I just love Pearlie & her spunk)! The plot/mysteries had me guessing & sometimes clueless. It’s definitely NOT one of those books where 50 pages in you know “whodunnit” & then spend the next 200 trudging through what you already knew.” By Karmela C Lyman, Amazon