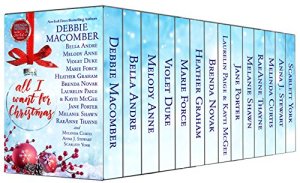 “5-B POPPY LANE” by Debbie Macomber
Come visit with Helen Shelton, her granddaughter Ruth and Ruth’s husband, Paul. They’ll offer you a cup of mulled cider and the story of how they met.

“KISSING UNDER THE MISTLETOE” by Bella Andre
For Mary Sullivan Christmas has always been about family. As she hangs her ornaments, she’s swept back to the first days of her whirlwind romance with her husband–and the love that would be the foundation on which they built their family.

“FINDING EACH OTHER” by Melody Anne
Brayden Steele gave up his love of Christmas many years ago when he lost his mother and father in a car wreck. But the magic hasn’t given up on him.

“BEFORE THAT PROMISE” by Violet Duke
If anyone can make Drew Lawson believe in the magic of Christmas, it’s the girl-next-door he’s classified as completely off-limits.

“CELEBRATION AFTER DARK” by Marie Force
On the occasion of their 40th wedding anniversary, Big Mac and Linda McCarthy take a look back at how they came to be, while each of their children confront a new challenge in their own lives.

“SPIRIT OF THE SEASON” by Heather Graham”
While struggling to raise her newly orphaned nephew, Davey, widow Becky Wexham must deal with the feelings she experiences when she once again comes into contact with Tim Yeagher, an old flame and Davey’s Little League coach.

“A DUNDEE CHRISTMAS” by Brenda Novak
Welcome to Dundee, Idaho, where the town is small but the hearts of the people living in it are large. A woman seeking refuge in an unfamiliar town during a snowstorm is taken in by a man who helps her discover a new sense of home.

No Perfect Fate: The day Cleo Anderson parks her Play-Mor in a small fish camp on the banks of the Suwannee River, her arrival draws the curious attention of eleven year old, Katie. Beautiful, yet shy, Cleo seems determined to avoid forming personal ties until Katie draws her into reluctant relationships with her godfather, Fletcher, and the plain-spoken elderly camp owner. Despite her reserve, Cleo soon becomes attached to the close-knit community of campers. Even as Cleo begins to overcome her reserve, she struggles with an inner voice and a past that haunts her and won’t let go.
No Perfect Secret: Betrayed thrice over by her husband, Anna believes her imploded life will right itself if only she buys a dog. Investigator Frank Caburn has other ideas. He already owns a dog. Man to the bone and manufacturing testosterone like Frito Lay does chips, all he wants is to fall in love and be done with it. But how to tell Anna without tripping over a layer of secrets is beyond him. Adding to Caburn’s woe are his elderly bosses–both of whom who plan to keep their jobs until the Rapture or the sun burns out–whichever comes last, a cross-dressing dominatrix with OCD, a purple haired hacker on parole, and Anna’s back-stabbing mother-in-law. Falling in love has never been more difficult.
No Perfect Destiny: Leah Spencer lives in the present until a past she has outrun imperils her future. An investigation into missing funds at work threatens all she holds dear. Detective Leo Garvey has her in his sights as the number one suspect and more. Leah knows she must be careful, that nothing good could come from Leo’s attraction. Leo doesn’t see it her way. If he proves her guilty, he loses. If innocent, he wins. Yet, convincing Leah the past can only be escaped by embracing something better seems to fall on deaf ears. While Leo works to uncover the truth, Leah determines it will never surface.

FREE!
A rousing family saga for the fight for America’s independence!

It’s a dangerous game you set to play, Miss Corbett. One that can have far worse than deadly consequences!

In the midst of the struggle of America’s bid for independence, Hannah Corbett makes a fateful decision, descending into a world of deceit. Spurred by revenge, she heads to New York, setting in motion a dangerous game for which there is no return. Searching desperately for the man who betrayed her family, she faces the cold and brutal reality of the life of a spy. Caught in a web of lies, living with betrayal, she is trapped. She has nowhere to turn except to a man it would be treasonous to love, setting duty and desire at war. Her heart is ripped apart when she must choose between the man who risks his career and life to protect her and the only thing that has remained constant in her life…her belief in her cause. 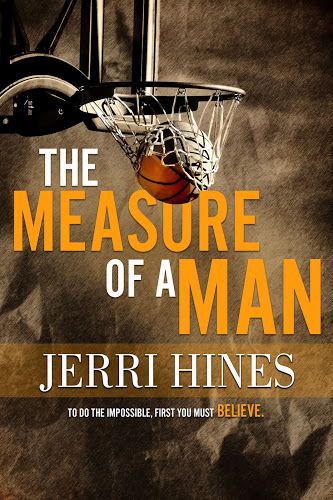