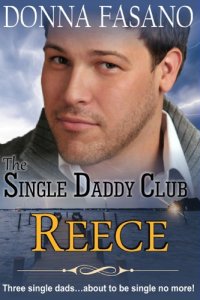 The only remaining single guy in the Single Dad Club, Reece Newton. Marriage may be the answer for all his friends, but not for this contented father of one. Of course, the right woman could change his mind…

Endangered Beauty
Woman in hiding, Maggie Dunlap. When someone ransacked her house and put her life in jeopardy, the lovely lady had nowhere to run—except into Reece’s protective embrace.

Eventual Bride?
Against his better judgment, Reece offered Maggie a safe haven in his home. Her mere presence changed the lives of father and son more than he ever dreamed possible. But would Maggie ever get the bachelor dad to the altar?

Powerful, thrilling and character-driven, this romantic suspense is a real page-turner.

Special Agent indeed, Kandice Warner is everyone’s best friend. Talk about a Barbie doll! This female might have the same pretty-girl looks but even though she has a tender heart, she also has the resilience needed for a very successful FBI Hostage Negotiator. Feelings of inadequacy constantly force her to prove that she’s tough, and she demonstrates her courage when dealing with a murderous bank robber, a desperate jumper, being stalked, kidnapped and beaten. But her tender heart can get her in trouble and she needs to grow a thicker skin. Almost impossible when her obstinate new boss, for reasons of his own, interferes in everything she does.

Assistant Director of the Criminal Investigative Division in Washington, Dan Black is as hard as they come. With the grit of a street youth stiffening his resolve, he’s worked his way up through the ranks, his personal space shields as strong as ever. Until he sees the sweetest things on two legs! A girl from his past. The one he’s never been able to forget. Working undercover in the Seattle bureau, he tries to protect his childhood fantasy but she refuses to stay put or take orders. Faced with a woman like that, what’s a mere man to do?

Nell’s seemingly simple existence is turned upside down when her father reveals a stunning secret: The seventeen-year-old isn’t human, but is a product of two warring alien species.

Now Nell must confront doubt and hostility because others see her as a threat to their way of life. In the midst of all that she’s facing, an even more mysterious secret eludes her. Finding the answers will set her on a desperate quest with danger lurking at every corner.

As the number of enemies steadily rise, so too does her resolve to seek the truth. With her friend Sam in tow, an epic adventure begins, the likes of which will have far-reaching implications.

In this first book of the Wexkia Trilogy, Author Dale Furse takes us on an adventure in a world, inhabited by bizarre beings and an uncertain future.