After the tragic death of his wife, Jasper, the 8th Duke of Bainbridge buried himself away in the dark cold walls of his home, Castle Blackwood. When he’s coaxed out of his self-imposed exile to attend the amusements of the Frost Fair, his life is irrevocably changed by his fateful meeting with Lady Katherine Adamson.

With her tight brown ringlets and silly white-ruffled gowns, Lady Katherine Adamson has found her dance card empty for two Seasons. After her father’s passing, Katherine learned the unreliability of men, and is determined to depend on no one, except herself. Until she meets Jasper…

In a desperate bid to avoid a match arranged by her family, Katherine makes the Duke of Bainbridge a shocking proposition—one that he accepts.

Only, as Katherine begins to love Jasper, she finds the arrangement agreed upon is not enough. And Jasper is left to decide if protecting his heart is more important than fighting for Katherine’s love. 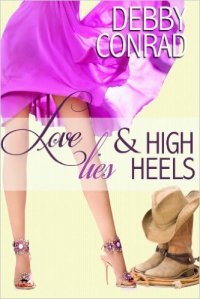 Who would have guessed a lie could bring them together?

LUKE GALLOWAY doesn’t lie. Well, not normally. And never about anything as serious as death. But, somehow Luke’s friend and business partner, Sam Paris, convinces Luke he needs to do just that. Sam believes the only way his daughter will come back to see him is if he were dying. And so the lies begin . . .

RUSTY PARIS has been alone most of her life. Her parents were divorced when she was very young. She was pushed off to boarding schools, while her mother made a hobby of marrying rich men. She doesn’t remember much about her father, only that he never made an attempt to be a part of her life for the past twenty-some years. But all that is about to change. When she gets word he is dying, she runs home to be by his side, which puts her right in the path of that scoundrel Luke Galloway.

Luke has no room in his life for rich heiresses. Been there. Done that. From the first time Luke and Rusty meet, they clash. She considers him nothing more than a lowly ranch hand who enjoys riling her temper. He finds her arrogant and prissy. But that doesn’t mean he can fight his attraction to her, nor hers to him. And when they find out they’ve both been duped by Rusty’s father the sparks really start to fly.

From the author of a #1 Amazon Historical Romance Kindle Bestseller, BROKEN LEGACY, comes FRAGMENTED, a suspense thriller that you won’t be able to put down!

The first in the Boston’s Crimes of Passion Series! A pulse-pounding thriller!Ms Connally’s first murder mystery delivers! Suspenseful…shocking…a psychological thriller– leaving readers on the edge of their seat. Cameron Quinn is caught in a web of deceit. Protecting her brother from being framed for a murder places Cameron in untold danger. When the real killer diverts his attention to her, she has nowhere to turn, especially not to the man she share done unforgettable night… who now is trying to put her brother in prison. A”must read” for any suspense lover!

She would do anything to protect her family…
Cameron Quinn watched her father fall into a world of despair after being falsely accused of causing her mother’s death.Now, her brother is a suspect in a crime she knows he’s not capable of committing. She’ll risk everything to save her brother from the same fate as her father, even destroying evidence that implicates him in a series of murders.

A killer would do anything to get his heart’s desire…
Cameron soon discovers that the police aren’t the only ones who suspect her of covering for er brother. The murderer is still out there and he isn’t happy his plans have been disrupted. Now, the twisted psychopath has turned his attention towards Cameron and will stop at nothing until he has her in his control.