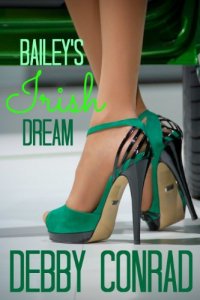 Why can’t she keep a fiancé long enough to get to the altar?

BAILEY MAGUIRE has just been dumped by her third fiancé. She can’t understand what’s so wrong with her that she can’t get a guy to stick around long enough to actually marry her. She’s reasonably attractive, a decent person (unless lying counts against her), and she has money. It just doesn’t make sense.

ZEDIDIAH QUINN is trying desperately to keep his head above water, but with a stack of bills a mile high, it hasn’t been easy. He has no regrets helping with his twin nephews’ exorbitant medical bills, but if he doesn’t come up with the kind of cash he needs soon, he’s going to lose Quinn’s Bar and Grill, the business he built from the ground up.

When Quinn overhears Bailey’s plan to dupe her parents with a phony fiancé, he thinks the idea is ludicrous. Although, when he discovers she’s willing to pay an obscene amount of money to the man who helps her, he entertains the idea. Briefly.

Quinn thinks she’s crazy, but when he realizes the money could actually save his business, he starts having second thoughts. All he has to do is show up for dinner at Bailey’s house, meet her family, act like a jerk, and leave. Simple, right? Wrong. This is where it all starts.