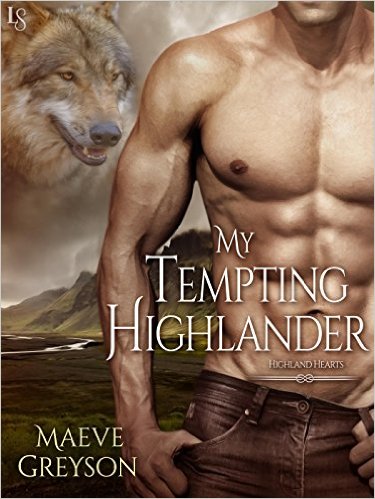 From the author of My Highland Bride—hailed by Sandy Blair as “an entertaining time-travel story packed with spice, humor, fantasy, and nonstop adventure”—comes a sensual novel featuring a wolf-shifting chieftain who travels centuries to modern-day Scotland to tame his one and only.

Cursed to live forever with neither wife nor child, Ronan Sutherland has watched all he cherishes turn to dust—more than once. For hundreds of years, he’s been trapped behind the mists of Loch Ness, hoping to identify the one woman who is prophesied to break the spell. Now, at last, the fates have aligned, and he’s being sent into the future to fetch her. After a single glimpse, Ronan knows he’s been waiting all his life for this passionate woman.

Unlike her time-traveling sisters, Mairi Sinclair is perfectly content to remain in the present. As a hospital nurse in Edinburgh, she cherishes the opportunity to put her gift of healing powers to good use. But everything changes the morning a mysterious wolf darts in front of her car. Touching the wounded creature’s tawny coat, a tingle surges through her. Yet when she returns with aid, Mairi is shocked to find instead a man with broad shoulders and fire in his eyes—a man who tempts her to unleash the animal within.