“Fragmented is a thoroughly engrossing romantic suspense which will have you turning the pages as fast as you can! Author Colleen Connally does a masterful job diving into the demented mind of a serial killer. If you liked Silence of the Lambs, you’ll love this story. Highly recommended!” ~ S.G. Rogers

“A gripping, page-turning thriller. You won’t be able to stop reading. And you’ll sleep with the lights on! Colleen Connally creates evocative words that will send more than chills down your spine. There’s also a few scenes that will grip your heart!”~ Elaine Raco Chase

“A fast-paced, sensual romantic suspense with a compelling heroine and a caring, dynamic hero.” ~ Lindsay Townsend 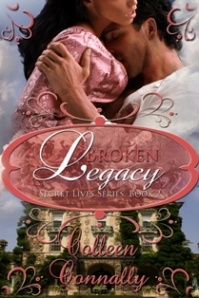 For seventeen years Lady Eloise Granville lived in France thinking herself a bastard. Not until her life was threatened did her father cross the English Channel to reclaim her as his legitimate daughter. Now four years later a revolution roars its ugly head in France. Rumors abound of Lady Eloise’s life before her emergence in England…rumors that link her to the notorious leaders of the French Revolution.

Thrown into a terror few escape, Gerard and Eloise discover a connection that will bind their lives forever—love. That is if they survive.

DON’T FORGET TO COMMENT FOR YOUR CHANCE TO WIN COPIES!

Also over on GOODREADS, she is giving away 5 signed copies of Fragmented at the end of the month on GOODREADS GIVAWAYS!